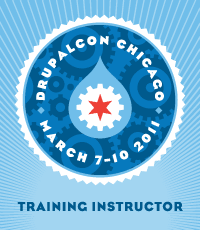 We’re happy to announce that we’ll be presenting a pre-conference training session: the Absolute Beginners Guide to Drupal, at DrupalCon Chicago next month.

The class will be identical to our normal Drupal beginner class that we’ve run dozens of times across the United States. Attendees get all the handouts and resources we provide at a regular class, plus the six months of after-class support.

The major difference is that the training will be the day before DrupalCon, Drupal’s major international event.

The classes will be held on March 7th at University of Chicago’s Gleacher Center, located steps from the conference venue. DrupalCon Chicago itself will runs from March 8-10 and will “feature dozens of curated sessions and panels from some of the most influential people and brightest minds within the Drupal community and beyond, as well as countless opportunities for networking, sprints, informal conversations, and more.”

You can find out more at http://chicago2011.drupal.org.