Spacing is important for web design.

Spacing is about giving every piece of content its own space on the screen. We use margin and padding to keep content separated from other elements such as images, video embeds and text.

An examples of spacing

Let’s see an example of design with good spacing:

Now, in example below we can see the same design without spacing:

By removing spacing, the content is still readable but looks unprofessional and disorganised.

In CSS, the two properties that makes spacing possible are padding and margin.

In this example, padding and margin are shown around the black border: 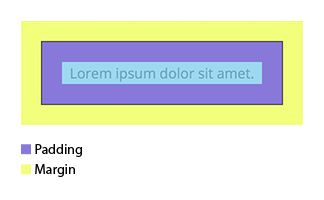 Are you interested in learning more about padding and margins? We have a Back to Basics: HTML Padding and Margins tutorial that will help you.

No offense man but this article is pretty lousy. I had to double take, it appears as if the article just cuts off suddenly…because you didn’t even cover the basics of effective margin/padding implementation. You’re not going to get anywhere with this blogspam.

This Didn’t help me at all

Me neither, but its still number one in my googlesearch for ‘spacing in webdesign’. wonder who is doing something about that

We have an updated, more detailed blog post that might be of interest.  Check it out [url=https://www.ostraining.com/blog/coding/back-to-the-basics-padding-and-margin/]here[/url].