Back in mid-2013, I wrote a post called, “The Bootstrap Boom is Just Getting Started“. Looking at the statistics, it was clear that Bootstrap was on its way to becoming very popular indeed.

3 years later, we looked again and saw that Bootstrap was growing even faster than we predicted.

Now in 2018, I decided to take another look. If you believe the official Bootstrap website, things are still going great:

Are those claims correct? Is Bootstrap still as dominant as they claim? Let’s look at the numbers …

How many websites are using Bootstrap?

Let’s start with a caveat: you can’t always trust 3rd party statistics when it comes to software use. But, they are the best data we’ll get and we probably can trust their year-on-year trends.

Although historical numbers aren’t available on the BuiltWith site, we recorded them in our previous posts:

Overall, BuiltWith shows around 18 million websites using Bootstrap. If you believe BuiltWith’s numbers, Bootstrap is still growing, although not as quickly as in previous years. 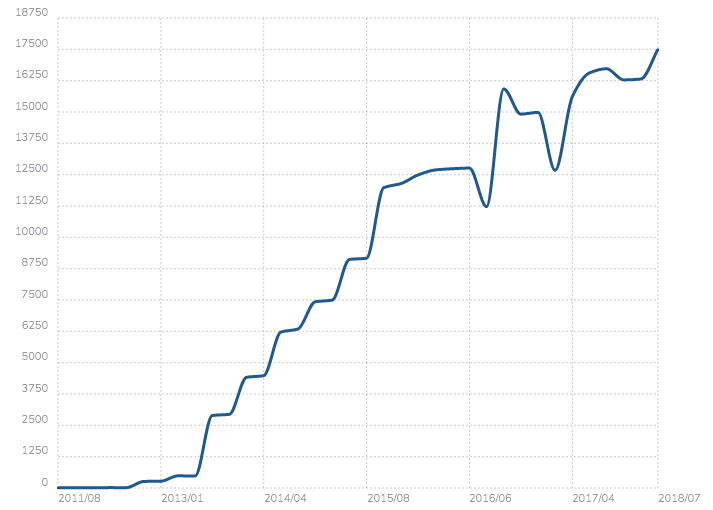 BuiltWith gives Bootstrap a 72% share of the framework market. Wappalyzer shows Bootstrap with a 52% share amongst web frameworks. 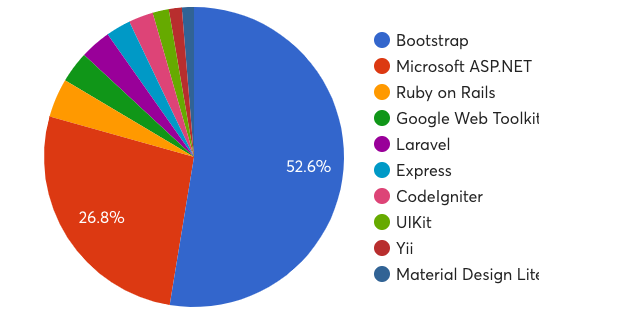 First and foremost, Bootstrap has great developer adoption. It is the most starred repo on Github.

However, it’s clear that a large portion of Bootstrap’s growth has come thanks to integration with other software.

For example, Bootstrap is baked into the Joomla 3 core and will be in Joomla 4 as well. However, Bootstrap also dominates when it is not the default choice. You’ll also find numerous Bootstrap themes for Magento, eZ Publish, Typo3 and more. Even platforms like Shopify now have hundreds of Bootstrap designs available.

Let’s take a look at Bootstrap usage in WordPress and Drupal:

In the WordPress world, I’ve been counting the number of Bootstrap-based themes on WordPress.org:

That is substantial growth in the WordPress world. There are even over 950 plugins that claim to use Bootstrap, although I suspect many more use it with explicitly saying so.

On the commercial side of WordPress, Bootstrap is also growing quickly. Back in 2016, ThemeForest had 2,500 Bootstrap themes for WordPress. That number is now over 6,600.

In contrast, look at the other popular themes on Drupal.org. All of them are seeing declining usage. This image below shows the usage Adaptive Theme, the second most popular Drupal 8 theme. Adaptive Theme has only 4,000 Drupal 8 installs, compared to 50,000 for Bootstrap.

After spending an afternoon looking at all this Drupal.org data, I’m going to make a big claim … I would not be surprised if Bootstrap is more popular than all the other Drupal 8 themes combined.

Finally, as with WordPress, it’s not only themes that rely on Bootstrap. There are also over 300 Drupal modules providing Bootstrap-related features.

You’ll notice that I didn’t talk at all about Bootstrap’s pros and cons. That’s a topic for another post.

But I think it’s clear that Bootstrap remains the most popular design framework on the web today. It’s been that way for several years now and it really has no close competitors:

If you want to learn Bootrap 4, check out this video class in the OSTraining library.

Hi Steve, thanks for all that data 🙂
You said pro & con is the subject of another post… My question is most “Why using another framework ?”
I was using warp/uikit2 and now i’m going on with uikit3. I really love that tools.
But sometimes, when I see most of joomla’s components delivered with a ready to use Bootstrap theme, i’m bit tired of rewriting it for uikit.

Yes, Bootstrap’s popularity has that effect. When it’s the default choice of so much software, it’s easy to go with the flow.

Putting both Bootstrap and Laravel in one graph is like comparing apples to pears. Bootstrap is a GUI framework, whereas Laravel is a PHP-backend framework. I use both in one project.