One year ago, the Drupal Community helped us to fund a Kickstarter project and publish “The Drupal 8 Beginner Class” for free on YouTube.

The goal of the Kickstarter was to make sure that as many people as possible can use Drupal 8.

I’m delighted to say that, with your help, this Kickstarter was more successful than we ever imagined.

Incredibly, the training is actually more popular now than when it launched, with around 18,000 views every week. The videos launched in November 2015, at the same time as Drupal 8, so the 1 million playlist views have occurred during just over a year.

In truth, the 1 million number actually underplays the popularity of the class. The individual videos have actually been viewed over 1,220,000 times.

The audience is truly worldwide with viewers from 209 countries. This is a list of the top 20 countries with viewers: 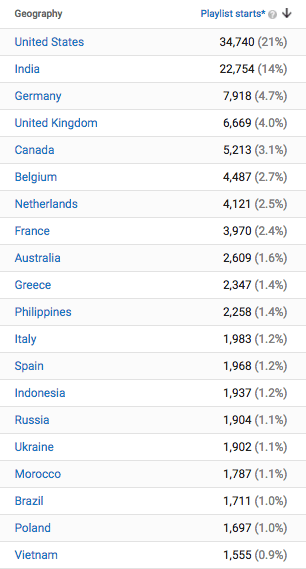 We owe a big thank you to all the individual Kickstarter backers. We also are indebted to the supporting organizations: the Drupal Association, Acquia, Glowhost, InMotionHosting and Commercial Progression.

The Kickstarter went beyond the Drupal 8 Beginner Class. At least two other classes have also been very popular

There are 50 more videos still to launch. These videos will hopefully touch on migrating your sites to Drupal 8, and other topics.

Thanks again and go Drupal 8!

Awesome! Thanks for making many series for free and promoting Drupal tirelessly which created many new opportunities for many! + 1 Million Thanks !!

You’re more than welcome, Simon. Thanks for the kind words.