I make my living as a writer, but I consider myself a lowly farm boy when it comes to teaching writers how to keep readers interested.

Many others could give better advice: Shakespeare and Austen, for example. They, however, aren’t writing much these days, so I’ll take my best shot.

The most popular forms of modern writing – blogs, Facebook and Twitter – were unheard of a decade or so ago.

Writers used to submit their work to what were known as “magazines,” defined by Merriam-Webster as “periodicals containing miscellaneous pieces (as articles, stories, poems) and often illustrated.” Try to imagine websites printed on paper.

If you had a story burning on your heart, you used a “typewriter” to put it on paper. Then you delved into the secrets of how to submit your work to specific magazines. Every meticulous detail was vital: spacing, title page details, footnotes, margins and page numbering had to be perfect to have any hope whatsoever of actually being “published.”

Should a junior assistant acting sub-editor actually browse your submission before lunch, you might be fortunate enough to earn a terse rejection letter. Laugh, but they were treasures. We framed them as reminders of the myopic fools who would be derided for generations after we won our first few Nobel literature prizes.

Magazines are as long-gone as stage coaches and beepers.

Today? Pffft. Write whatever you want, in any font, color or size and publish it on your blog for all to see in 30 minutes or less. But good writing remains the same.

Where do you begin when you write?

With a good story.

A few days before Thanksgiving in 1973, Ronnie – a college classmate – and I decided we’d hop into my 1970 Gremlin and drive from Rochester, New York, to see our mutual friend, Howard, in Virginia. Our mission? To deliver a present and have a free meal from the hands of Howard’s wonder-wife, Cheryl.

After our final class, Ronnie and I made our way south, having too much fun to consult weather forecasts. This was a Road Trip! We heard a killer blizzard was heading to where we were, but we were blissfully ignorant about what lay (laid? lie? lied?) ahead on our path.

As we outran the snowstorm, Ronnie complained that the only vent in the car blasted insufferable heat onto his left foot, while my gas-pedal foot froze. Ronnie could not endure the temperatures he thought would cause his wet leather boots to burst into flames. To cope with the copious heat, he removed his shirt, rolled down his window and flailed his scrawny body outside in the snowstorm at 50 MPH, yelling to other motorists about his sufferings in the fiery furnace that was my automobile.

Two black stripes were all we could see of the highway. The passing lane was covered with snow. The storm was getting worse. Cars were in ditches and blinkers blinked out ominous warnings to slow down.

As I complained of my frostbitten toes, Ronnie scooped snow off the car to douse his burning feet. I never want to know how many families he frightened and how many accidents he caused. 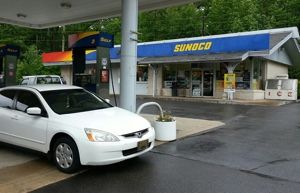 As we neared the intersection of Interstates 81 & 80 in Pennsylvania, we saw a sign for an open gas station. We pulled off the superhighway onto a supersnowy off-ramp. The Gremlin had a stick-shift and no snow tires, but we made it up the slippery slope to the Sunoco station at Dorrance, Pennslyvania.

I knew we were in trouble when I saw how my car cut a swath through the unplowed snow by the pumps. We filled up, moved the car to the edge of the parking lot and went inside for supplies and advice. The TV blared news of The Storm. Drivers were urged to stay off the highways. Motels were full. Trucks clogged the roads.

The service station didn’t have snow tires in the size I needed to continue traveling south. Soon, the entire parking lot was crammed with cars.

Thanksgiving at Howard’s was not going to happen. No way. No how. Ronnie, no longer tormented by the Gremlin’s hellish heater, and I decided to remain at the station for sodas and snacks … and a long winter’s rest.

You might not think that being stuck in a gas station/repair shop over a family holiday would be tolerable; but, there we were – hordes of strangers with a spirit of Thanksgiving – happy that we were not freezing to death (or in Ronnie’s case, being broiled to death) in a snowbank on a dark, cold road.

Night came. The Sunoco station stayed open. Room at the inn for the weary.

Exhausted, I sought a quiet corner where I could shut my eyes. Fat chance. Ever seen that Star Trek episode where the planet was so overcrowded there was nowhere to escape the crowds? That’s what it was like. Not a trekkie? Imagine having all your in-laws visit your studio apartment.

I had to sleep.

A vehicle was in one the bays. A local funeral home’s hearse was there for repairs. Eventually it looked good enough to consider for a little bit of shut-eye.

Who knew hearses have rollers in the back? Makes sense, I guess, but that isn’t ideal for temporary sleep. I bit the bullet and got inside and to rest.

Trust me. The back of a hearse isn’t a terrific place to nap. Talk about bad dreams!

I slowly opened my eyes, more fearful than rested. I was alive! Thankful that I was not driving down the road to you-know-where.

Bearded guys with four-wheel-drive trucks helped unclog the parking lot a day or two later. The Sunoco station and the roads were cleared.

Ronnie and I finally made it to Howard’s house. We ate, dropped off our cargo and hit the road the next morning to get back to school. The trip home was far less eventful.

I’m not sure what ever happened to Ronnie. For all I know, he’s a professional fire walker.

Howard and Cheryl are still together.

The Gremlin? Great car. Someday I’ll tell you about the day it died in Tiburon, California … and it wasn’t even snowing.

The 5 elements of a good story

A friend told me recently that she liked watching movies “about people.” The TV program “60 Minutes” turned news programs into a genre because all their stories are about people.

Good stories are about people.

Your readers want to get to know the folks in your story, even if they’re bad guys.

Unrealistic expectations destroy relationships of all sorts, but they create intriguing stories.

Give your readers an expectation of what is going to occur, before you pull the rug out from under them.

If your hero or villain is driving down the road and sees a broken-down car with people in it, your readers should be able to predict how your character will react. That’s the only way to surprise them when they act “out of character.”

What’s that line about enduring “quiet desperation”? We all endure hardship.

Readers, in my humble opinion, want to vicariously overcome hardship and conflict through your tale, even if they know it’s fiction.

Help readers identify with the trials in your story. Give them hope that it won’t last forever, in your story or their own.

While watching “The African Queen” with Suzannah, the screen went dark toward the end of the movie. She shouted, “Are you kidding me? That’s how it ends?!” Thankfully, it wasn’t how the conclusion.

Moments later there was resolution. The story made sense. It was OK to let it go.

Is there room for a “hanging ending”? Of course, that’s what drives sequels. But bring your story to a rest, even if it keeps readers wondering what happened next.

For example, do you think Rhett and Scarlett ever got back together after “Gone With the Wind” ended? I do.

#5. Lessons or the morals of the story

All good stories have a point or “take away” value.

What was the lesson in the story I told?

How many dozens or hundreds of similar stories could you put into print? How would you adapt this story to make it your own? What story would you like to tell? Write it down!

If you want to be a writer, you have to write down your best stories.

Hi,
Good story. For me a key element is that the story is plausible, that it can persuade the reader that what is being told really happened or could have happened (for example in fiction). Lot of stories (in written but also in the case of movies, tv, etc.) fail in accomplishing this.

Interesting Post, Could you give me some more updates about Energy Audits Rochester NY.

Interesting Post, Could you give me some more updates about tshirt printing Rochester
NY.

well explained.. thanks for sharing your thoughts..