The Wednesday keynote at DrupalCon Denver was by Mitchell Baker who is the Chairperson of the Mozilla Foundation. The title of her talk was “Collaboration, the “Maker Ethic” and Internet Freedom”.

Keypoints of the Keynote

There’s a huge difference between creating and consuming.

Most people thing of Mozilla for Firefox. It’s much more. Firefox is a revenue generator to help other tasks.

Their mission is to build freedom into the fabric of the internet.

Their missions is not to “win” against any proprietary model, but to provide an alternative.

There are two sides to Mozilla:

They have 500 / 600 employees worldwide and need a hugely complex legal organization to hire them in so many different countries.

Mitchell described the web as consisting of several layers. Openness has done very well at the HTML /  CSS / JS level with WordPress, Joomla, Drupal and others gaining big market share. Openness is not doing nearly so well at other levels. 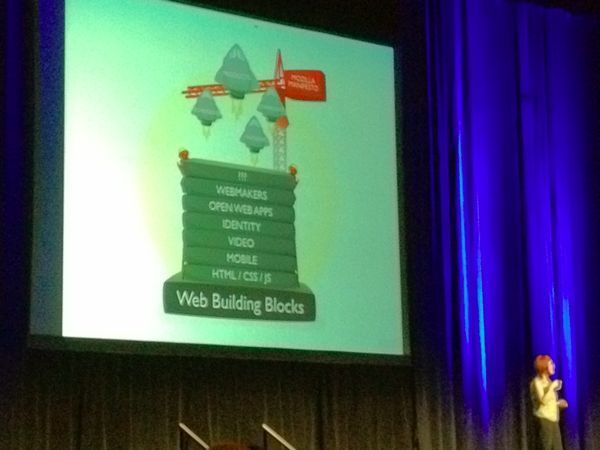 Open is not doing well with Mobile. Apple provides a very elegant consumption experience. Mobile is getting more and more closed.

Boot2Gecko or B2G is the name for Mozilla’s new phone. It runs a Linux kernel. Working with Telefonica to bring it to market. http://www.mozilla.org/en-US/b2g/

Video used to run on a Flash model where only consumption was possible. Mozilla wants to focus on interactivity for video. They are developing Popcorn.js to help with this: http://popcornjs.org/. To Mozilla, video = executing at runtime in a web environment.

Do you want to use Facebook, Twitter etc as authentication. Many people don’t want to use a privatized identity. Mozilla is working on https://browserid.org/.

Persona is Mozilla’s answer to social media that isn’t bound to a single company’s vision. It will have a single login: https://beta.mozillalabs.com/en-US/persona/

The Web Apps initiative to corss the things that people like about apps with the freedom and innovation that have been great about the web: https://www.mozilla.org/en-US/apps/.

There’s more to come in terms of building blocks. Neither Mozilla nor anyone else really knows what’s next.

Mozilla aims to build products and community on top of these building blocks.

The ability to employee people is very important. Volunteers won’t shut up if they disagree. They key is melding employees and volunteers. ‘When someone is spending 15-20 hours a week building the world they want, it’s hard to keep that person quiet’

This will continue to be a hugely exciting opportunity in years to come because “there is a whole generation for whom devices are more natural than pencil and paper”.

Lots of questions via Twitter about OpenID. Why is Mozilla re-creating the wheel? Mitchell’s answer is that there are a couple of issues that were roadblocks and were too difficult to change in OpenID. My guess from the tone of the answer is that there was a bit more to the story than that.

Video and codecs? This will be tough. Mozilla might have to be practical when it comes to codecs and they might have to pick their battles. Essentially h.264 has won. “We will probably lose some of our contributors and evangelists because of [H.264] decision, but will have better product … I really believe in putting products in front of people that they love.”