This is a live blog of the Drupal Media session at DrupalCon Denver by Aaron Winborn and Dave Reid. The sessions is all about the Media module. We wrote a detailed introduction to the Media module here.

Aaron wrote the Drupal Multimedia book. He introduces himself as an ALS sufferer who will likely die within a year unless he’s one of the lucky 10%. If he is one of the lucky 10%, he’ll live in a locked-in sate. He’ss increasingly physically weak and can’t hear very well. He wrote about the condition here.

The big goals for the Media module

The history of the Media module

This has been going on for around 4 years now. There have been a serious of sprints with some improvements already sent to core. They joke that it has been a 4 year code sprint.

Acquia’s need to use it on DrupalGardens was a big help and got the media to beta status.

The module is finally in Release Candidate and there’s the possibility of a 1.0 release this week.

1.x and 2.x versions are floating around. You can read a comparison between Media 1.x and 2.x. Essentially 1.x is the stable version and recommended for production use. People are using 2.x live but they are braver people.

There’s now a stack from highest to lowest (Drupal 7 is at the bottom) with software levels building on each other: 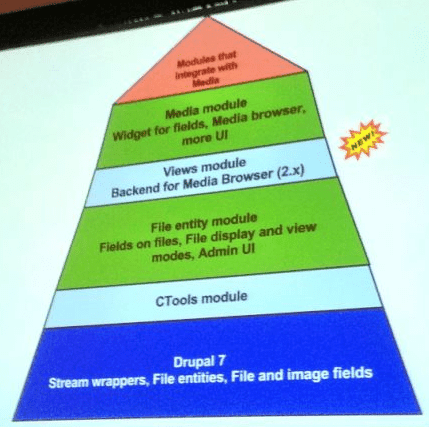 How to use the Media Module

Dave Reid then give a demonstration of how the Media module works. You can get a similar, detailed overview in our Media module tutorial.

One thing we didn’t cover in that tutorial is how to add the Media module to your WYSIWYG. You can that via Configuration > WYSIWYG profiles and add the WYSIWYG button.

Another thing that we didn’t cover was adding fields to files. You can do that via Structure > File types.

The future of the Media Module

There is an unofficial Media initiative for Drupal 8 (you can find a list of the official initaitives here).

There are meetings every second Thursday in the #drupal-media channel on IRC.

It’s hard to tell what Media will look like in Drupal 8 yet. There will likely need to be a lot of communication with the main initiatives such as WYSIWYG and HTML5.