This week Drupal fans gathered in Colorado for DrupalCon Denver.

Dries Buytaert gave the keynote address. He talked about the mobile web and the plans for Drupal 8.

There were just over 3000 people at DrupalCon this year and most of them were in the huge auditorium at the Colorado Convention Center. 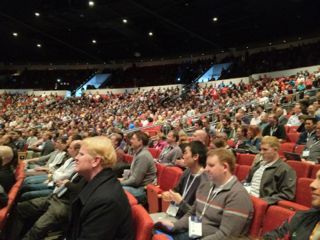 Keypoints of the Keynote

Video of the Keynote

Companies fail because they stop innovating. Kodak is a great example. They invented digital photography but weren’t bold enough to disrupt their own existing business. 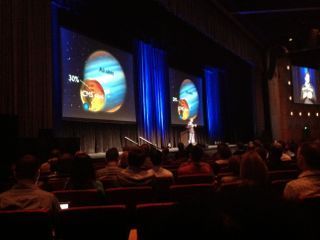 A SWOT Analysis of Drupal

Dries jumps into a SWOT analysis of Drupal today:

We are now in the 5th major tech cycle of the last 50 years: mobile. There are 1.5 million Drupal sites and from this point forward there are three big opportunities for growth

Time to kick ass with D8. Focus will be on three audiences: developers, site visitors, authors.

They spent months thinking on how to update the framework. Their conclusion was to leverage Symfony much more than expected: “we found out we wanted to use more of it than we expected”. It’s a huge decision. It’s similar to the decision to use JQuery for the backend. He hopes that sing more Symfony will help attract more devs.

Needs to be great mobile experience. In 2010, only 3% mobile. The prediction is that the vast majority of traffic will be mobile by 2015. That traffic will consist of two types: apps and browsers. We need to address both.

Need to embrace a mobile culture. Need to do it before everyone else. 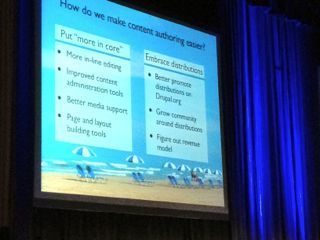 Here’s the schedule for Drupal 8:

Drupal initiatives are going well on the design but not on the implementation yet. Here’s a detailed overview of the iniatives. Needs help. Here’s where they are today: 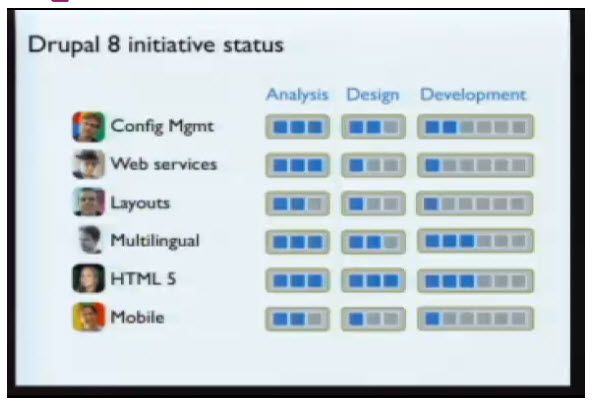