Steve Burge April 13, 2017
32 Comments
One of the features that our members most often want is to host videos on their site.

As it happens, we’ve learned a little about how to do that over the years.

We’ve been hosting video for 10 years, and the technology is almost unrecognizable. In it’s infancy 10 years ago, today’s video technology is truly amazing.

Here are our four recommendations if you want to host video yourself:

This is the option that our members always seem to look at first. However, we rarely advise doing this.

There are advantages to hosting videos yourself:

However, there are also multiple disadvantages to hosting your own videos:

For these reasons, we don’t host any of our own videos. 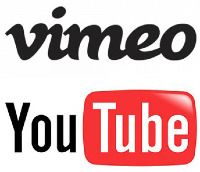 Both YouTube and Vimeo are great options for hosting videos:

The downside is that neither YouTube nor the free version of Vimeo works particularly well if you’re running a professional-quality site.

We’ve gone through many options for video hosting. Each time we’ve upgraded slightly, buying more features, more space and better service. As technology changes over time, and some hosts just don’t keep up.

First, on a previous site, we self-hosted our videos. That’s why we know so many of the disadvantages of self-hosting!

Second, when we launched OSTraining, we used a site called Screencast.com. They charged only $10 per month, but we only had around 100 videos at launch. Screencast provides only a simple player with few customization options.

Third, when we needed a more professional look and more space, we moved to VPFactory.com for three times the price of Screencast. That company is no longer in business, but they allowed us to create a custom OSTraining video player. VPFactory also converted our videos so that they were mobile-ready.

Next, we updated again to Brightcove.com. Brightcove was around ten times the price of Screencast, but they are one of the biggest boys in video. Most big newspapers and media sites work with them in one way or another.

Now, we’re on Wistia.com. Any video shown in the OSTraining membership library is served from Wistia. We’ve also developed a Joomla extension for Wistia and a WordPress plugin for Wistia to make it easy to use embed videos.

Lesson #4: Not Many People Have High Speed Connections

As soon as your audience expands, you’ll start to run into people with very slow or expensive connections. This means that many of your videos aren’t available to most people.

We had people complaining of connection problems on both Screencast and VFactory. African countries, I could understand. South American and South-east Asian countries too. But we also started to get a lot of video playback problems from Australians. Apparently, they have some of the worst and most expensive internet in the world. Even some parts of the United States and Europe had very slow connections.

It was only when we joined Wistia that the problem was solved. To solve connection problems, when you upload a video to Wistia they create many different versions. Each copy is a different size and is optimized for a different connection speed. If we upload an HD version of a video, that version can still be served to a viewer in New York on a T1 line. However, if a viewer is in Africa or Australia, Wistia will serve one of the other versions which are smaller and lower quality.

Let’s turn this over to you guys. Hosting video online is a tricky and constantly changing challenge. What advice do you have for people wanting to show videos on their site?

Hi, this is a great little post & thankfully coincides with my experience. My clients, mostly public sector or B2C, often ask about hosting promotional videos & I always recommend YouTube rather than self hosting, not least because of the wider exposure to search.

Very helpful information. Thank you. My comment is an exact duplicate of freshwebservices above. Youtube is good for SEO. Youtube is the second largest search engine after Google!! But I agree that it lacks professional appeal.

This was great article. Yes youtube is good and its free but not good for corporate websites/clients as it show annoying advertising and also show recommendations of competitors video some times after the video is over. I heard first time about brightcove from this post and will explore it in more details. Thanks again and keep us posted about such solutions which you gained form your experience. It helps!!

that sites is great to host videos, actually i use vimeo and youtube, but whats do you think about amazon s3?.

I use youtube and even facebook video on a client’s small restaurant site. But I pop the videos into a FancyBox popup so all extraneous stuff is not shown. The visitor stays on the client’s site. When the video is over, replay is the only option, or closing the fancybox popup. No Next or Related videos are shown. Javascript is used to send iOS users to the YouTube app.

Thanks for this brilliant and helpful analysis. We’re about to launch a video site for sports where users submit their videos to attract attention. I was concerned about bandwidth, users in Africa and South America without huge resources or advanced technology, YouTube branding and the cost to us of using S3 for users without a YouTube account. By laying out a migration path you seem yo have solved all our issues in one fell swoop. Thanks.

Great article! Another great competitor, but not as large as Brightcove, is Screen9 in Sweden. We also offer a professional service for uploading videos from any device to any device using adaptive streaming. We are able to give great support and we work very closely with our customers, which is greatly valued and appreciated especially for start ups. Feel free to contact us if you would like to know more. Thanks /Samuel

Thanks for the post. We have used Brightcove for most of our clients. The largest one hosting a number of training videos. But the support for WordPress is a pain. We are searching for a more integrated solution.

Thank Alastair. I should update this and mention that we’re also moving away from Brightcove, partly because of the support.
We’re standardizing on [url=http://Wistia.com]Wistia.com[/url] now.

@tangoev I tell you what – could you ping us via @OSTraining.com">support@OSTraining.com? We have may have something interesting for you regarding Brightcove.

Hi Lucky,
We’re now on Wistia and have loved the experience.

Thank you for a great article. We self host all videos right now, but it is not great for all the reasons you state above. I am seriously considering switching to Vimeo Pro, but have one major concern, which is security. We sell footage so have the need to display to buyers, but also need to protect against piracy. Is Vimeo Pro safe from piracy, or at least as safe as our current self hosting. Any advice would be greatly appreciated.

No, nothing is safe from piracy. If you put videos online, people will steal them.

I am really impressed together with your writing talents and also with the structure to your blog.[url=http://www.324g.co.uk/]o2 mobiles[/url]

How about DailyMotion? It’s free, and you can disable branding on the embedded player.

That’s a reliable choice too. They’ve been around for a while.

I always met problems with Dailymotion, in New Caledonia (South Pacific near Australia) or even here in Canada now…

Thanks for the kind words Ricardo
Daniel

Thanks, Steve, good info (as usual). However, in your next to last paragraph, you mention Brightcove again after Wistia. I know OST has moved to Wistia, do you mean Wistia will serve up the appropriate version?

And, when I looked at some of the comments they were 4 & 5 years old.

Hi webJim,
It is an updated article

I’m not sure when this article was written (some comments are from 5 years ago??) but in either case, the video hosting landscape has advanced the past few years.
I agree that YouTube and Vimeo sites are great for promotions. You could say they are best used for branding and influencer outreach but not so good for professional videos, or when you want to get viewers to learn more about your product or service specifically. HTML5 video ensures that video is accessible across different devices and MPEG-Dash (still very new) helps viewers access video content at their data connection speed wherever they are in the world. So, lesson 4 (probably relevant at the time of writing this post) will become less of an issue.
Video hosting services should keep updating. Moving hosts is simply not practical if you have a lot of videos uploaded. As client demands increase, so should the hosting company keep up.

Hi Moriam,
It is an updated article, While some may enjoy good internet speeds now I can assure you we have a wide audience and you would be surprised at the poor quality of internet available in some areas.

Hi Steve,
Thanks for your reply. When you write about poor quality internet are you speaking about specific countries? If so, I’d be really interested to know what kind of low quality you’ve or OS users experience. I live in The Netherlands and am quite spoilt. Everyone has broadband here. In fact since 2003/4, so it’s a given but I have no data on other countries and for my work this is good would be good to know.

Hi Steve. What would recommend for a non-profit who would like to display about 75 videos on their site? Wistia is far too pricey for us. & we don’t want to upload them to YouTube. They’re currently stored in an Amazon S3 bucket – but I’m not sure how to get them to display on the site. Any suggestions? Thanks 🙂

Not many people have high speed connections? Really? are you serious? How about 95% of Europe, Japan, Singapore, North Korea, the middle east, many large cities in China, Canada, the US, etc. etc.

How about using Dash and HLS to get your video to automatically change bitrate and quality in fonction of the wifi connection ? It seems like a good idea and the only downside is that you would have to encode 12 different versions of your video.