On this blog we’ve interviewed with people who are helping open source make inroads at universities.

We’ve spoken with teachers of open source at Harvard, Emory, Penn State and other colleges.

This week we’re delighted to talk with Lisa Tennant who teaches Drupal at Florida Technical College.

Hi Lisa. Can you introduce yourself?

I’m Lisa R. Tennant and I teach the Web, Multimedia and Graphics classes for an Associate’s Degree at Florida Technical College, Deland campus. I’ve been a graphic designer for almost 30 years.

And can you introduce your Drupal class?

I ran the Drupal class, Electronic Publishing, as part of the multimedia segment of the Associates coursework. I require the students to build a large web project with the ability to bring in other media types using a website builder.

I thought Drupal would be the ideal environment for web development for several reasons. The students would not be required to know programming or markup, and although Drupal is the more complex Content Management System of the popular open-source platforms, I felt that it would allow the students to build larger, more complex websites and be able to build on their own learning immediately after learning core Drupal.

After reviewing a number of books on Drupal 7, I settled on “Drupal 7 Explained“. It was only after officially incorporating the book into our curriculum that I realized that I had met you (Steve) at DrupalCamp Florida the year before. The students we very excited to get started.

What was good about using Drupal 7 Explained?

I really appreciated the fact that we were guided to upload the most useful modules that one would use on most sites. We appreciated the order in which the topics were covered. My students know that I rarely cover a book for a class in the exact order it was written, and we don’t always have time to go through an entire book for a one-month course. This book we went straight through and covered the entire book.

Where did Drupal 7 Explained not work so well? 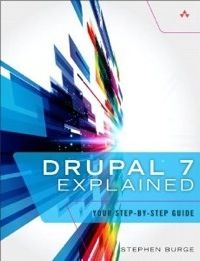 There were a few things that I covered which I approached slightly differently than your book because, once I understood the concepts, I wanted to impart them to the students for efficiency and understanding.

I’ve attached several screenshots of the concepts we drew up:

The first three photos you see are when I covered content types. Before even diving into the text, I laid out a concept that I think is important. I personally had difficulty understanding the relationship between content types and how they related to fields. I think they are heavily tied together, and initially when I went through your book myself, it seemed like they were separate pieces at first.

The diagrams I drew showed how the content type directly controlled what showed up on the page and how the fields that were filled in were in direct relation to each other. Every time a field (which I referred to as a form field) was filled in, that little piece of content became part of the overall content for the content type. The original content types built into core Drupal could be added to by adding another form field.

Basically, they were given an understanding right from the beginning that they were filling in a form, being asked questions according to the content type as to what was going to show up in the node or on the page. I also had to explain the difference between the page content type and a regular page.

What were some of the problems the students faced?

Many of my students came in having already hand coded HTML and CSS. Therefore, a “page” to them meant a complete page with a url for that page document, complete with headers, footer, navigation, content, etc. on it. Here in Drupal I referred to it always as the “page content type” for adding content, or an “ACTUAL page” such as the home page to avoid confusion.

Where did the students build their Drupal sites?

In Chapter Three you only address starting a Drupal site on a live server, or getting it there as soon as possible. Given our particular situation, we could not do that at all. We had to develop locally. I also could not go through Acquia Drupal DAMP stack, as our permissions on campus prevented us from using it. Our alternative was using XAMPP, which we use for our Php and SQL classes. It worked just fine, we had the latest versions of Apache and MySQL. It works for MAC, WIN and LINUX OS’s. I was able to put Acquia Drupal on my Macbook Pro and bring it in to demonstrate its usage in case the students decided to try it on their own.

Where there any particular challenges with Drupal?

Yes. With the Views module, I found that we disliked the grid in layout form from the example. As designers, the grid layout looks terrible. The photos are different sizes and the titles are different lengths being one, two or three lines long depending on the info you wanted to include, and the content becomes centered vertically, and flush left. A designer would never lay out a page looking random like that. We would put the information in a grid that had the information centered horizontally and placed along the grid cell from the top for the vertical placement so the tops are all across at the same level.

Another challenge was the slideshow and using it in Views. I went through your book and a number of other sources to find out where the images were coming from. It was not obvious as to where Drupal was pulling them from. I kept looking for something that I could choose the images from or locate where the images were. Because we were building our own sites instead of the Drupalville site, we were not necessarily using the Article content type for our slideshow. We had a set of banner images that the students built during a previous web graphics class that they intended use for their site. What we had to discover was, if we wanted just a set of graphics that we custom built for the site, we had to make a new content type just for the slideshow itself. We made a banner content type that had the name of the image, the image itself, the author or artist credit, and the copyright info. We could use all of the info from it, or just the images alone.

Just about everything else worked perfectly from the book. My students came out with functioning websites at the end and the ability to do their next site right away. I directed them to read some of the structure documentation at Drupal.org during the course as a supplement to the book, and they had a great time. They are looking forward to coming to DrupalCamp Florida in the spring.

I am going to leave you with a quote from one of my students that I think you’ll get a kick out of. As we were heading into the Layouts modules chapter, Laura said “Boy, Drupal just keeps getting better and better!”

Steve, this is an example of why I really appreciate OSTraining – you were willing to ask Lisa some direct questions, and I am confident that you will take her comments to heart, and continue to improve OST. So, just change the last sentence, and substitute “OSTraining” for “Drupal”.

Thanks for the kind words, Mark!

Teaching drupal to college students which will increase their knowledge and providing them basic training to know about this. [url=http://www.assignmentbox.co.uk/]assignment box[/url]