Every year we go to DrupalCon (this time it was in Nashville).

Every year, it’s an excellent event.

Every year, Dries Buytaert gives his keynote address, known as the “Driesnote”.

However, something was different this year.

In the past, Drupal’s release cycles were vague and so the Driesnotes often focused of proposals and ideas. “It will be ready when it’s ready” was a favorite quote.

That changes this year. In Nashville, Dries presented a detailed roadmap for where Drupal is headed. There has been an official roadmap page on Drupal.org since 2016, but it never had any real information. Now it full of information about what’s coming to Drupal 8.

I’m going to give you a quick-start guide to every item the roadmap presented at DrupalCon, starting with the next release: Drupal 8.6 in September. This image belows show the roadmap from the Driesnote: 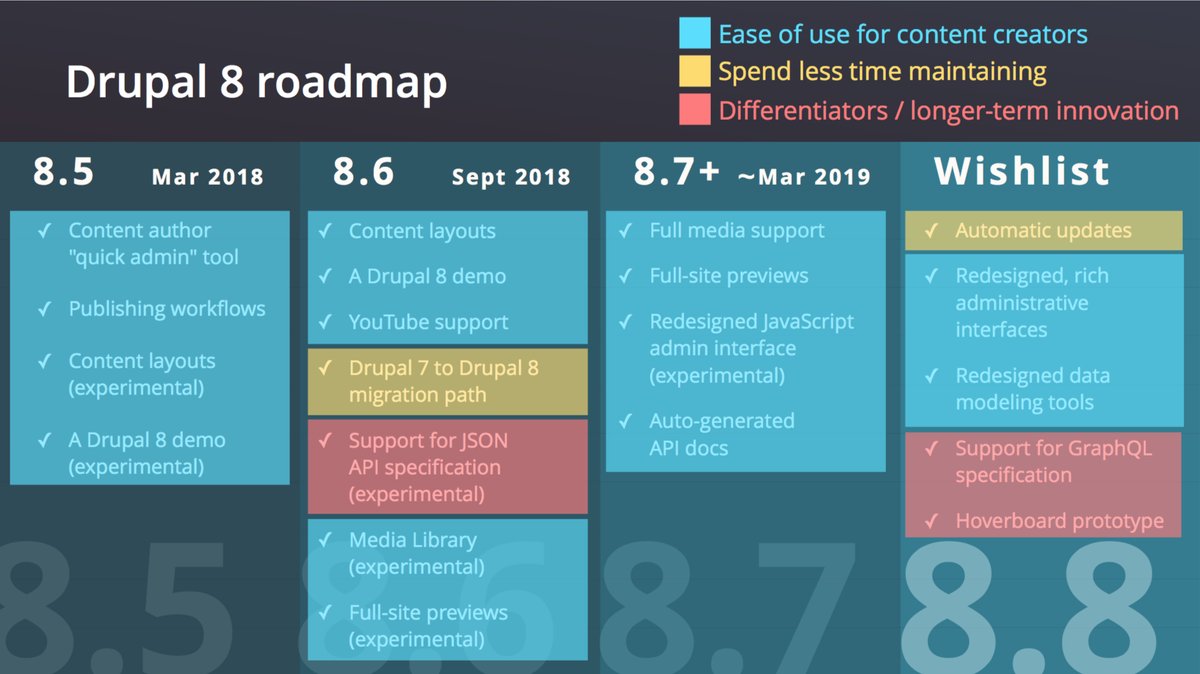 Content layouts: We have covered this a couple of times on the OSTraining blog, first when Drupal 8.5 was launched and then in a full tutorial. The best way to think about this could be, “Panels is now in core”. This feature is already in the Drupal core now and ready for you to test! Click here to see the full Layout initiative. 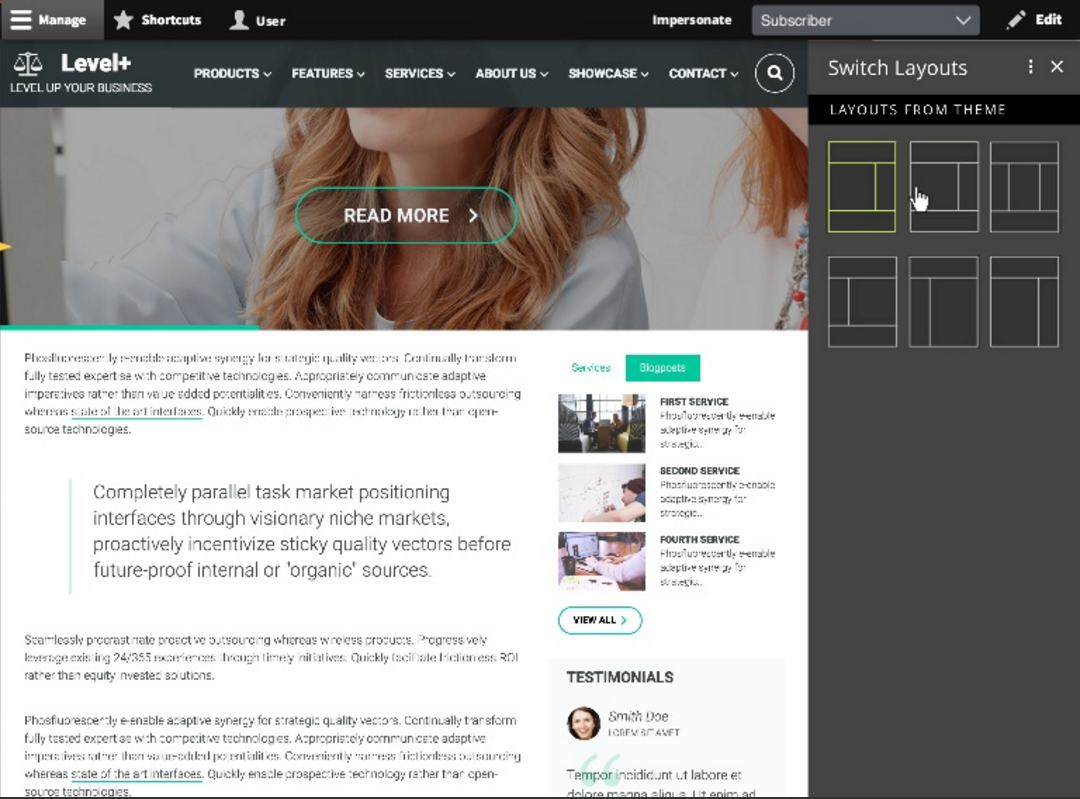 A Drupal 8 demo: This is also known as the Out-of-the-Box initiative. Here’s a quote explaining the goal of this project: “Installing Drupal currently gives you a mostly empty box. There is no demo content nor much preconfigured functionality. This makes for a weak first impression and makes it hard for the evaluator to connect the dots and find out what Drupal can do for them. The Out of the Box Experience initiative (OOTB) aims to improve this situation. The goal is to add sample content presented in a well designed theme, presented as a food magazine. Using recipes and feature articles this example site will make Drupal look much better right from the start and help evaluators explore core Drupal concepts like content types, fields, blocks, views, taxonomy, etc.” Click here to see the issue for this new demo content.

YouTube support: This is part of the new Media features in Drupal 8. This basic Media module is already in the Drupal 8 core, but it’s not very useful yet. The plan is that you will be able to add YouTube embeds to your site, alongside the more basic Media types: Images and Files.

Drupal 7 to Drupal 8 migration path: The migration path to Drupal 8 will finally become stable … three years after the launch of Drupal 8. That’s way too late, but at least it’s almost done. In fact, if you read the official issue queue, the migration tools are stable now: “So the only thing blocking it from going stable at this point is that it depends on an unstable module. Meaning, migrate_drupal. Otherwise, the UI is now as stable should be considered Un-Officially stable!!! Go out and migrate using it.” The main limitation at the moment seems to be with multi-lingual sites.

Support for JSON API specification: I’m not quite sure why this item made the list, as it’s a more minor change. This update allows Drupal to show which version of the JSON API specs is currently supported.

Media Library (experimental): Currently Drupal 8 does not have a browseable media library. You need to know the name of the file in order to find any media that you uploaded previously. Go to 44:50 of the Driesnote video and you’ll see a preview of the new library. Click here to see the full Media Library issue. 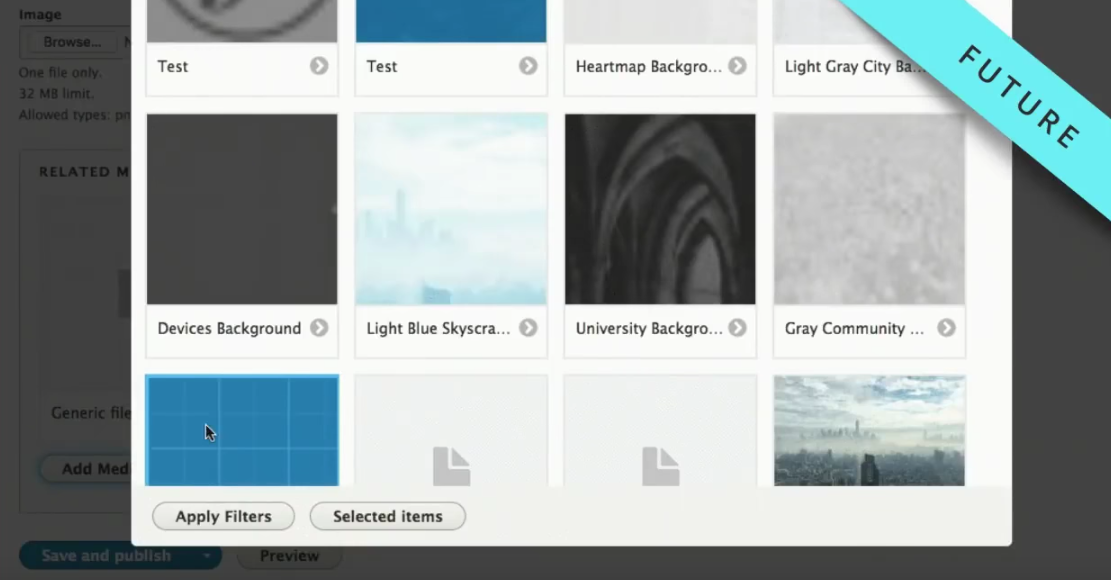 Full-site previews: This is a really interesting new feature which introduces the ability to preview and stage changes. Drupal will have the option to create a new version of a page. You can work on this page in private, and then push it live. Drupal will call these “Workspaces”, so you’ll have a Staging and a Production workspace. This would be an ideal solution if you wanted to prepare landing pages to launch on a certain date, or get approval for updates to existing pages. Click here to read more about this initiative.

Auto-generated API docs: It’s generally agreed the Drupal 8 API documentation is lacking. There’s talk of a new project to overhaul all the documentation, but the API docs could be automatically generated as with Symfony.

Redesigned Javascript admin interface (experimental): Scroll down and watch from about 43:00 of the Driesnote for an introduction to this topic. The image below shows what the redesigned Drupal 8 could look like. You can find more images on this Drupal.org issue. This is part of a larger initiative called “Modernize Drupal’s Javascript“. It is 10 years now since Drupal added jQuery to the core, and it’s now time to move on to alternatives such as React. The very ambitious goal for Drupal 8.7 is to “create an alternative admin experience for Drupal as a single-page React application”. 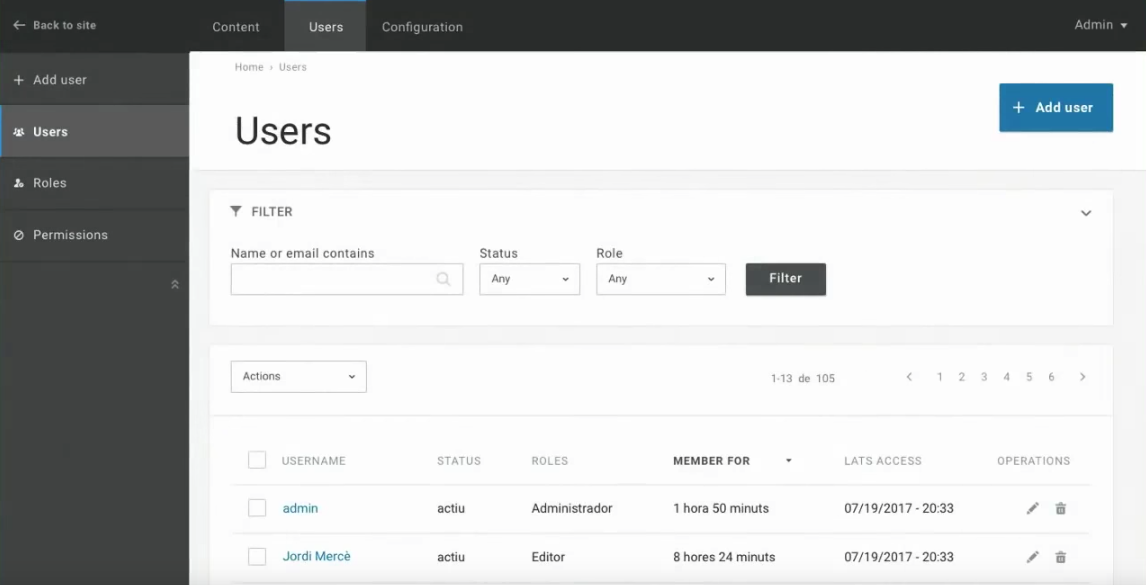 What’s on the Wishlist?

Automatic updates: There is an official initiative working on this. “Updating a Drupal site can be difficult, time-consuming, and expensive. While implementing an automatic updates system is a difficult problem, and not without its risks, it is a problem that has been solved by other platforms, and that Drupal can address.” We wrote about the need for this in 2014. The short version of this after Drupalgeddeon 1 and Drupalgeddeon 2, Drupal can’t afford to leave so many sites unpatched. Blaming the site owners is not a good strategy.

Redesigned data modelling tools: There’s no information available at this project yet.

Support for GraphQL specification: This is part of the API-first initative. Working is being done in the GraphQL module which will form the basis of this project.

Hoverboard prototype: Honestly, this isn’t needed. This problem was solved in 1989.

Watch the Driesnote from Nashville

Thanks for the re-cap. Saves from listening to the whole thing.