Over the last few years we’ve been writing a regular series called the “State of Drupal 8”.

We aim to give a short, plain English update for people who don’t follow Drupal development closely.

Where is Drupal 8 right now?

The current version of Drupal 8 is Beta 7.

The Beta phase started in October last year and will finish when all the “critical” bugs are resolved. A critical bug is defined as bugs that render a system unusable and have no workaround, cause loss of data or expose security vulnerabilities.

How many critical bugs are left? Starting at the end of November, there has been significant progress. The number of critical bugs has gone down from over 130 to under 50.

At the current rate of progress, we could see the Beta phase end later this year, perhaps around the time of DrupalCon Barcelona, at the end of September. 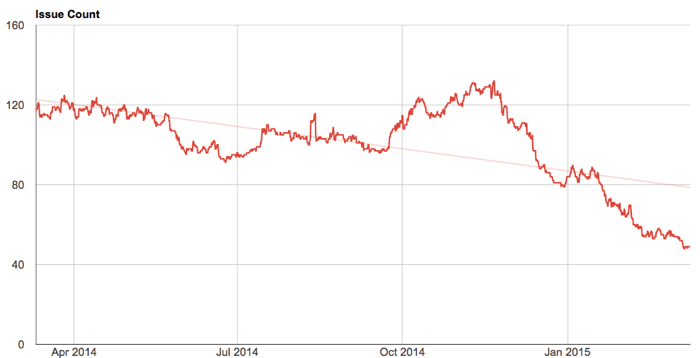 After the Beta phase ends, there is one more step: the Release Candidate phase.

Release candidates are usually only created once no more critical bugs have been reported in a given beta release. These are considered nearly stable code, something the Drupal development community is considering as a candidate to be released as the official .0 version.

How does a Release Candidate become the official stable release?

A Release Candidate has to go for 2 weeks without a new critical bug being found. You can see the full details of that policy here: https://www.drupal.org/node/2362647.

So how should you factor Drupal 8 into your plans?

How you plan for Drupal 8 will depend on whether you thinking about a new or existing Drupal site.

If you’re curious about Drupal 8, you can test it now. Simplytest.me allows you to test Drupal 8 very easily in their free sandboxes. You can also download the latest Beta files from Drupal.org.

Thank you for sharing this article Steve. I run 2 Drupal 6 and 1 Drupal 7 sites and this has been useful .

You’re welcome, Euclides. There’s good news here for Drupal 6 owners, I hope – you may have 9 to 12 months more of security updates.

Thanks for keeping us in the loop. I’m excited for the capabilities of 8.

As of March 2015, the state of Drupal 8 is somewhere between epic failure, tragic kingdom, science fiction and a pinch of Sunset Blvd.
Most businesses built on Drupal 7 will skip Drupal 8, while the ones running Drupal 6 will either migrate to Drupal 8 or abandon the Drupal Titanic experience altogether.
Drupal is, as usual, unprepared for the future.