Back in August 2013, we wrote a post called, “The Bootstrap Boom is Just Getting Started“.

At that time, we estimated that Bootstrap powered between 1.5% and 3% of the web.

2 years later, I decided to check in on Bootstrap. How popular is the framework now? Did the Bootstrap boom continue, or has it bust?

The screenshot below is of Builtwith.com’s stats from mid-2013. You can see that Bootstrap’s usage was between 1.6% and 2.8%, depending on how which measurement you used: 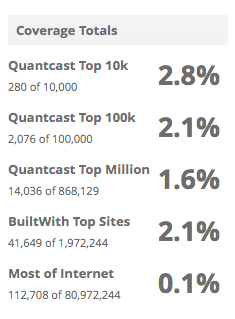 This next screenshot shows today’s stats from BuiltWith.com. Bootstrap is between 3 and 5 times more popular than it was in mid-2013. Close to 10% of all websites are using Bootstrap! 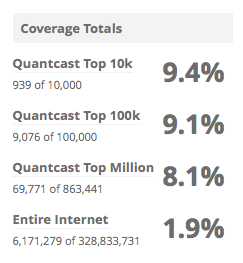 Next, I used Google Trends to estimate the popularity of searches for Bootstrap.

Bootstrap was open sourced in August 2011. You can searches start to increase almost immediately and they’ve continued climbing ever since:

Just in case you think these searches might be related to actual boots, here’s what Google shows as related searches: 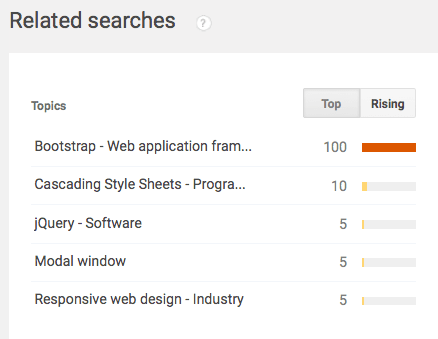 In the WordPress world, the number of themes using Bootstrap has exploded: 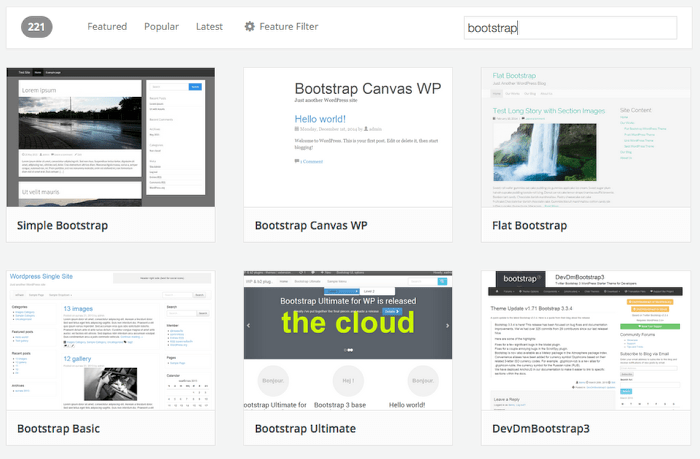 Beyond WordPress, other popular platforms use Bootstrap in a big way:

I was genuinely shocked to see how far Bootstrap’s popularity has grown.

Bootstrap is becoming the design version of PHP.

Both offer easy experiences for newcomers, when compared to the alternatives.

Both are widely mocked by purists.

I think the numbers are somewhat inflated because deep down I feel most themers are looking for a solid grid system, not so much all of the bells and whistles that Bootstrap and Foundation provide. I have seen more cases where themers will say “wow this grid just works” then spend time figuring out how to de-engineer/de-style framework components, or try to use their own with ease and run into issues.
This is the current trend right now, but I feel in 1-3 years the next wave will be hybrid frameworks starting with a solid grid system and very little if any out of the box style, so you can build your own set of tools quickly.

Good points, Kevin. There definitely are downsides to Bootstrap, like with PHP, WordPress and other dominant tools. I guess it shows just how strong they are in other areas.

Another statistic is about 350K downloads and 72K active users of [url=http://drupal.org/project/bootstrap]drupal.org/project/bootstrap[/url] however it is a constant battle to theme with drupal. Here is a great perspective on bootstrap theming…https://[url=http://drupalwatchdog.com/blog/2015/8/drupal-should-use-external-front-end-framework%5Ddrupalwatchdog.com/blog/201…[/url]

What an interesting link. Thanks Shawn. That’s worth adding to the article itself.

I prefer Foundation. Not to mention every single page that uses Bootstrap looks the same. Just like you can always spot a Drupal website 😉

I spent a lot of time along with Chris Lee making the Foundation framework theme very usable, and it has been mostly successful. This is why I chose to step back and start with just a grid system, sensible defaults, and allow the themer to choose their path from there using the Neat grid system.
[url=http://www.velir.com/blog/index.php/2015/06/05/neato-a-neat-bourbon-based-theme-framework-for-drupal/]http://www.velir.com/blog/i…[/url]

Ivan – agreed. I hear that a lot from pro designers. However, Foundation is a long way behind in terms of momentum and market share.

“Market share”. Those are sales terms. I am a developer and Foundation is, in my opinion, a better when it comes to technological aspect. I haven’t used Bootstrap for a long time now so maybe it’s better now. But I don’t care. I still use Foundation everywhere. To me, Bootstrap is the shiny WordPress for everyone out there. But Foundation is the carefully thought-out Drupal that is not for everyone but for people who know better ,)
But since Drupal 8 finally removed any Drupalisms from its core I don’t care which framework will be used since no classes will be present in the core code. So if nothing is hardcoded I’m a happy camper.

Thanks Ivan. We agreed – we use UIKit on this site 🙂

I disagree with the opinion that all Bootstrap templates look the same. You can blame the designer for that, don’t blame Bootstrap itself. We’ve built many Bootstrap based websites and they sure don’t look “bootstrapish”. Bootstrap has evolved from version 1 to 2 (used in Joomla), to 3 and now alpha 4 is available. It’s a bit a shame that these versions aren’t backwards compatible. Bootstrap 3 is much better than 2, but unfortunately Joomla outputs Bootstrap 2 based html code. Therefor to use Bootstrap 3 in a Joomla 3 based website you will have to write quite some overrides. And Boostrap 4 will be different again.
Another good thing I find about Bootstrap is that there are many many resources and extensions available. For Foundation that is a but less (which I find a nice CSS framework too).

I agree – for many months there has been a growing number of people saying that template makers RocketTheme, YooTheme and the like are getting lazy with the monthly templates. Ok, any good designer SHOULD be able to individualise/ customise to suit the clients needs, but for the last 18 months the trend seems to be “tart up” not develop new ideas 🙁
I know RocketTheme have just released Gantry5 so development hasn’t stopped -but- releasing a new framework is t an excuse to tweak and re-release all the old templates with a new name
Let’s see some proper revolutionary designs, from the clubs and designers for both free and premium themes / templates