A little while ago we made the decision here at ostraining.com to alter how our name is shown to visitors.

We changed “Open Source Training” to “OSTraining” throughout our site. The main reason? In our user testing and customer interactions we constantly found that people were confused about the phrase “Open Source”. We kept on hearing comments like these:

That left us with two options:

We went with option 2. We realised that visitors need to know that we’re great trainers first and foremost. The fact that we work with open source can wait.

The thing is, we’re not alone in this. I went to look at the websites for a lot of big Open Source companies and nearly all of them mention “open source” far less than they once did. I picked five companies as examples. Here are some screenshots from archive.org compared with the 2012 version of their sites: 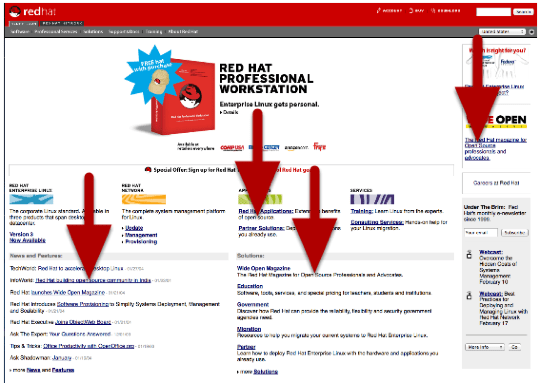 Here’s the single mention, tucked underneath a menu: 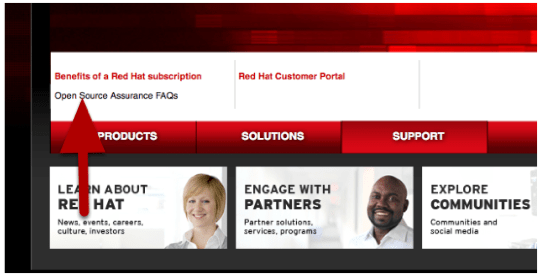 I gave up pointing out all of the examples on this archived page:

There were so many that I’ve only marked those at the top of the homepage.

Apologies for the low quality of this particular archive.org snapshot.

I wonder if “open source” is disappearing for one or more of these reasons?

What do you think? Is it a good thing or a bad thing that the word “open source” is used less by companies relying that rely on it?

In most cases: definitely answer #1. I truly believe that Open Source software is really good marketing argument and can be used as such.

However in case of big companies as RedHat I think their customer do not really care if the software is Open Source or not because the whole product is just good.

Definitely #1. People think “open source” means “free beer”. We don’t explain it as open source code, and the ability to manipulate that code accordingly. People think “open source” means free software. While that’s frequently (but not necessarily) true, it doesn’t define an open source project, and we don’t set people straight on that by explaining that you may need to pay someone for installation, customization, or training, if you don’t do it yourself.

As for #2, it’s true that most OS companies offer more than code, but I’m not sure that’s driving things.

Finally, I’d expand on #3 or add a #4: acceptance of open source as a legitimate approach, equally as proprietary systems. Open source used to mean “no support”, and that’s really not true anymore, so enterprise is more accepting of the open source approach. As long as support is available and the product is reasonably secure, enterprise seems happy most of the time.

I think Jen Kramer’s #4 is important.

When we shop for solutions, Open Source is an important feature. Sometimes, even a requirement, but what we’re looking for most of all is a great solution.

The “open source” and “free software” movements are historically linked, and it’s funny because the “free” there doesn’t mean what a lot of people think it means. Neither does open source.

It’s so common-place these days that it’s no longer a product differentiator.

“I was under the impression that Open Source training meant I wouldn’t have to pay for it. I won’t be coming back.”

Yes! We love spending our time teaching people how to use software and have no plans to capitalize any of this. Our investors and stock holders love this business model.

It seems that all the previous commenters come from a professional background – where the price of the product matters less when compared to the quality of the product.

But if you are a student or if you come from a poor country, then you want “open source” (meaning “gratis”) software products simply because you have no money to pay for the software…

Great article, thanks for sharing the reasoning behind your rebrand. It’s the value you place on transparency and your ability to communicate that sets you above the rest. Love the case studies too.

Comments like “It’s disgusting that you guys charge for Open Source training,” are patent bullshit. It’s like saying “You should bust your asses working for no pay whatsoever”. Unreasonable.

Good on you for managing this false sense of entitlement in a logical way. Love the cited examples too.