Steve and I are sitting in the ballroom at the Oregon Convention Center enjoying the Thursday morning keynote: The Engineer, the Designer and the Dictator by Michael Lopp.

Michael Lopp is a Silicon Valley-based engineering leader who builds both people and software at companies such as Borland, Netscape, Apple, and Palantir Technologies.

While he’s not worrying about staying relevant, he writes the blog, Rands in Repose.

Michael started by saying that your job has an expiration date. It seems to be about every three years.

During the course of your career, it is likely you will have an undeniable urge to build a thing. It is equally likely that while you are well-intentioned, you are horrifically bad at a skill that is essential to successful thing building. 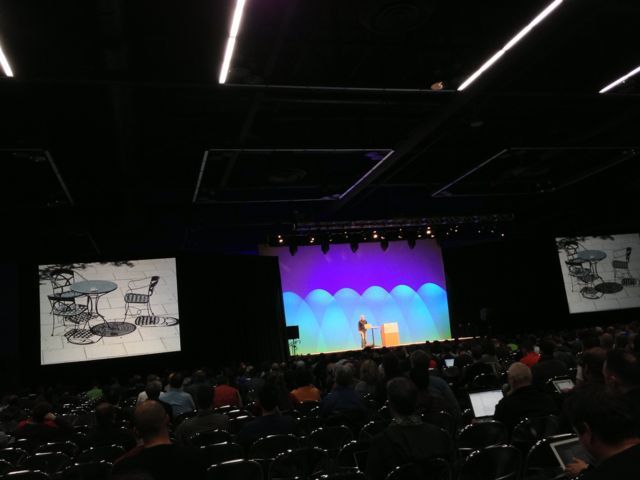 We’re going to talk about the “next” thing you’re going to work on and the team you’ll need – the engineer, the designer and the dictator.

Michael has written two books – Managing Humans and Being Geek.

In order for your next venture to succeed – you need those three.

Everyone needs an engineer – without one you get chaos. There are a lot of people out there (MBA types) who think because they have an idea – I can get it done. But they don’t understand what’s going on, and chaos results. He likens it to “Tron Legacy” – the worlds greatest screensaver with a soundtrack. The idea of this movie – “there is a perfect system”. We can take that chaos and make it understandable – and this is why you need an engineer at the table. Pretty much a given for this crowd – we get that we need an engineer.

and none of it is work… its just how we think.

Engineers sit there every three years and get the itch, the urge to build something new. The interesting thing is that “nerds”, engineers are “taking over”. Facebook, Quora, Google – all created by nerds and the CEO is an engineer.

The problem for engineers – humans will use your product!

Engineers have to remember – you’re not the audience – you’re not the user. Humans are! It was fine in the beginning – but at some point your mom got online and wanted to send a picture of her cat!

We need to have someone there whose job it is to represent the humans!

A good designer has three traits:

A great illustration of this is the unboxing experience of an Apple product (watch the video for this part – Michael does a great job of describing this experience).

There is a fundamental tension between engineering and design. Therefore – you must have a dictator.

Without the dictator – you get nothing.

Michael gave the illustration of a fantastic conference organizer from New Zealand. She is a really nice… dictator. Everything she does for the conference is designed to make you feel awesome.

Someone just tweeted: Is there a place for the dictator in open source? @rands #DCLopp #drupalcon. It’s a great question.

Again – another illustration. When the iPad launched, Steve Jobs basically stripped the file system out of the user experience. Your mom doesn’t need to save the picture of her cat in a format to send, save it and send it. She just needs to take the picture and click send.

Dictators are forces of nature.

You’re three years away from changing. You’re horrifically bad at something …. DON’T do that. Do what you’re good at.