“The big wheel keeps on turning

WordPress is moving at full speed

The WordPress world is struggling right now. The WordPress wheel is turning really fast. It feels as if nothing happened for two years, and then we had those two years of progress in a single month.

The main new feature will be a health check which will provide useful information on your site’s health. For example, are you using an unsupported version of PHP?

Also, there’s going to be white screen of death protection. This will catch “any fatal errors that a PHP update might produce. From the front facing side of the website, the site will still be white screened, but with the protection in place, the user can still access the admin panel.”

If a plugin breaks your site, WordPress will try to automatically disable that plugin and tell you what the problem is:

Gutenberg Phase 1 is complete, but full adoption is going to take a long time. The Classic Editor has over 2 million installs.

Here at OSTraining, we’re continuing to write about and explore Gutenberg. This week, we wrote about converting your existing posts to Gutenberg, plus a guide to the Twenty Nineteen theme.

Phase 2 of Gutenberg is already underway, although it’s mostly at the ideas stage. The goal of Phase 2 is to move all of WordPress’ layout features into Gutenberg. Here’s the scope for Phase 2, and this is the most detailed overview I’ve seen so far.

This rapid movement is causing some pushback. The most valid criticism I’ve seen is that Matt announced the roadmap for the next few years of WordPress with almost no outside input. Here’s the roadmap from the State of the Word:

Those goals will probably take WordPress until 2022 at least, but the community had no input on those decisions.

For good or bad, WordPress has no formal community leadership and wpgovernance.com is an effort to change that.

Why does this matter? Because, WordPress remains a juggernaut with a very wide influence over the web.

W3Techs collects statistics on the popularity of web technologies. In their 2018 rankings, WordPress won the CMS category again, of course:

“WordPress is the undisputed ruler of the CMS space. It is now used by 32.7% of all websites, more than all the other 600+ systems in our surveys combined. It is the fastest growing content management system for the 9th year in a row.”

What was more surprising is that Jetpack finished second in the analytics category behind only Google. WordPress is a massive ship that turns slowly and if you launch major releases with only a couple of days notice, your userbase is going to be struggling.

So could Matt have done things differently? Perhaps. It’s interesting to compare his approach to Dries’ approach. Drupal hasn’t had any releases lately, but Dries has been busy blogging and making plans.

Drupal is going to refresh their UI in two stages. Initally, they’ll redesign the current interface, and next will be a whole new Javascript-based interface. This image is a preview of the first update:

Dries has started to write a lot about future plans for Drupal, including this two new posts:

This is clear planning, done months and years in advance. Dries also found time to draw a strong line on accessibility, which was forgotten in the rush to release Gutenberg.

However, unlike WordPress, Drupal has not being enjoying strong growth lately. So it was interesting to see Dries talk about the launch of Acquia Cloud in 2009 as the turning point for Acquia (and also for Drupal):

Unfortunately, Drupal is now firmly at the “Stagnation point” shown in that image. Drupal.org metrics suggest that Drupal started stagnating in about 2013. So, Dries is brainstroming how to restart Drupal’s growth.

Finally, we’ve talked a lot in this post about the success of WordPress and Drupal (or at least, Acquia), so I’ll note a couple of new publicity campaigns.

WordPress.com is running some new TV spots, and Acquia is putting up highway billboards in the Boston area. 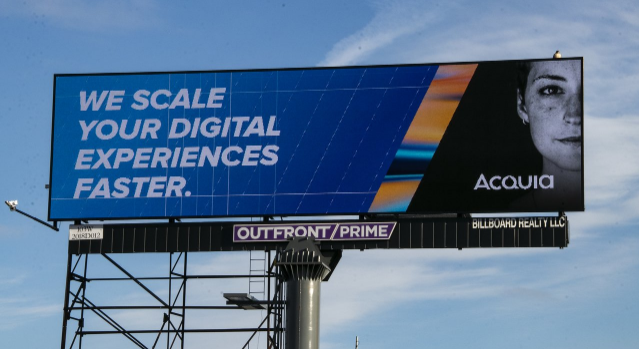