Every six months, the Drupal team get to release new features.

This is a major change in Drupal 8. Whereas Drupal 7 never had any new features, Drupal 8 has had three significant updates, with Drupal 8.1, Drupal 8.2 and Drupal 8.3.

So what new features are available in 8.4?

I’m glad you asked! We made a short video with our friends at Acquia, introducing all the changes:

New or Updated Modules in 8.4

Perhaps the major theme with 8.4 is a major push to make progress with experimental modules.

Before now only one experimental module (Big Pipe) has become stable. In contrast, 5 important modules went stable in 8.4:

Although this is great progress, I do need to add two notes of caution.

First, the Migrate modules are stilll not stable. This will continue to restrict the number of sites that can move to Drupal 8.

Second, you will still need to use experimental or contrib modules in order to take advantage of these improvements.

If you want a full rundown of all the new features currently in development, check out Angie Byron’s overview.

The most intriguing part of 8.4 is probably Media. Better media handling is the most commonly requested feature in all our Drupal training sessions. Here’s what the official Media initiative has to say:

While Drupal core includes basic file and image support, it is a far cry from what a modern web system should support out of the box for media handling. External media cannot be embedded easily in core and media cannot be reused.

The Media features are still still a work-in-progress, particularly for 8.4. Yes, the main module is in the core but there’s more work to be done. The file field and image field widgets need to be converted to use the Media module, and a lot more of the Media ecosystem needs to be built out. The main UI features won’t be available until 8.5 arrives in April next year.

If you want to see what the final version of Media will look like, it’s worth trying the Lightning distribution. This is a project from Acquia. It is designed to bring core features to market early. Lightning allows Acquia to move more quickly than the Drupal core, putting new features into production and then contributing them back. Click here to install Lightning at SimplyTest.me. 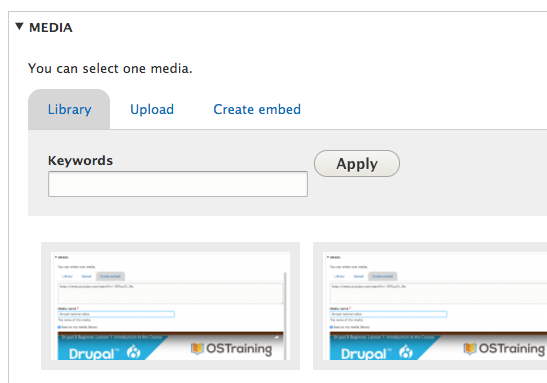 You can embed videos and save them to your media library:

You can embed tweets and save them to your media library: 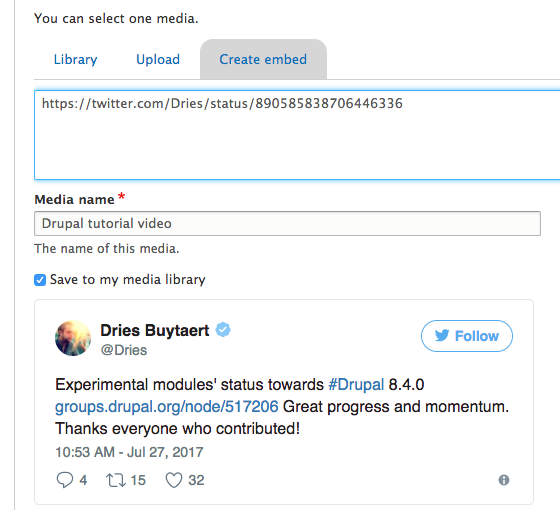 This is a reusable system. It can also be applied to documents, audio files, Instagram posts, Slideshare documents and any other type of media you want to use with Drupal.

All-in-all, this will be a big step forward for Drupal. It will make the platform much more user-friendly.

There are a couple of other notable things about the Media module:

Drupal 8.4 lays the basis for huge improvements, but they are not ready to use. If you install 8.4, or update your site, you won’t notice any visible changes.

However, when 8.5 arrives in early 2018, Drupal will have new layout, workflow and media systems. Drupal will become a much more powerful system. But it’s not there quite yet with 8.4.

Angie Byron is again the person to turn to for more details: check out her roadmap for Drupal 8.5 and 8.6.

Are there any tips as to what we can do now to make sure that we are prepped for the transition to 8.4 media routines?

Hi Christopher. Not yet … we’ll probably know more when the Release Candidate arrives and the feature set is finalized.

Thanks for the article. I would like to give a try. I’m still using drupal 7 but It’s high time to migrate to drupal 8.

Embed option is really an essential part for a CMS. As an enthusiast about Drupal, I really like to see that feature as no one can show finger towards it.